Winter has come and gone…well, hopefully it is gone…and it is time to do a quarterly update of the three year-long reading challenge I am participating in this year! 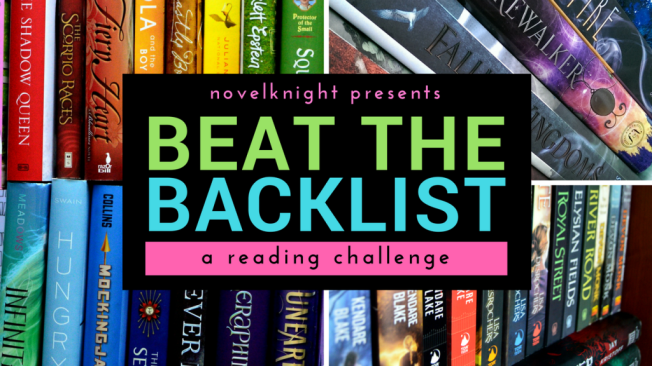 My goal for NovelKnight’s Beat the Backlist challenge is to read at least 24 books off of my massive TBR list! I am not quite as far as I would like to be in this challenge, but I’m hoping to play catch-up in April and May.

This is what I have read for this challenge from Jan – March:

Least Favorite: Year of No Sugar

This is definitely my favorite challenge of the year! Here is what I read from Jan – March:

Favorite: The Hate U Give

Least Favorite: Of Fire and Stars

Popsugar always has a fun 52-week reading challenge that I like to do. Last year I failed miserably at completing the challenge, and I am hoping to do better in 2017! Here is my progress so far:

Favorite: A Conjuring of Light

Least Favorite: A Year of No Sugar

I will be participating in NovelKnight’s Beat the Backlist Hogwarts House Challenge for 2017! In addition, each year I always participate in the TBR Group Challenge at Library Thing.

My minimum goal for 2017 is the first 24 books on this list. Quite a few of them are definitely large, chunky books…I’m looking at you George R.R. Martin and Ron Chernow!

I happen to have a few themes for 2017. The two biggest themes are Agatha Christie and Series reads. In 2017, I plan on starting my goal of reading all of Agatha Christie’s books in order of publication; I only listed the first 8 on this post, but consider all of them on my backlist (except for the 5-6 I have already read)!

My second theme of 2017 is to tackle a few series that I have been meaning to read for a while: Game of Thrones, Divergent, and Throne of Glass, to name a few.

I also have quite a few books on the list that further my goal of reading more diversely in 2017: George, Brief Wondrous Life of Oscar Wao, The Sympathizer, Timekeeper are just a few that fulfill that category.

And finally, quite a few books make an appearance by authors I have read in the past and loved, and want to read more of their work.  Jacqueline Winspear, Agatha Christie, Chimamanda Ngozi Adichie, Neil Gaiman and Gregory Maguire all fit into that category.

As for the Hogwarts House Mini Challenge, I am a proud Ravenclaw!

The Top 24 TBR/Beat the Backlist Books:

Are you going to try the BTB challenge? What’s on your list?