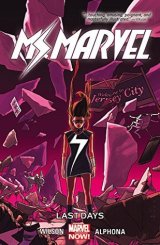 I reviewed Volume 1 of the Ms. Marvel series a few weeks ago. After reading that one, I definitely wanted to continue with the series! I found the perfect opportunity to catch up on some of the later volumes on New Year’s Day, during a 9-hour drive home from Florida to North Carolina. Here is a very quick run-down of what I thought of each of them.

Volume 2: Generation Why – What an excellent sequel! The Inventor storyline continues into Volume 2, and one of my favorites, Wolverine, makes an appearance in this one! The Wolverine cameo and Ms. Marvel’s fangirl reaction was a ton of fun to read. And Lockjaw! I’m personally not a fan of big, slobbery dogs, but I’ll make an exception for Lockjaw. I also love how G. Willow Wilson writes Kamala as a character who is both an incredibly strong female superhero, and a teenager dealing with teenager problems. The positive message at the end alluding to the stereotypes against the millennial generation….EXCELLENT! Rating: 4/5 stars

“A hero is someone who tries to do the right thing, even when it’s HARD. There are more of us than you think.”

Volume 3: Crushed – The Ms. Marvel volumes keep getting more and more fun! This volume was Valentine’s Day themed and featured a cameo of Loki (adopted brother of Thor) and the God of Mischief. There was also an Agents of S.H.I.E.L.D bonus comic at the end, which made me all the more interested to watch the TV show. Rating: 4/5 stars

Volume 4: Last Days – By far, my favorite of the series so far. Titled Last Days, this is the Secret Wars story arc that spreads across the Marvel Universe. But what I love about this volume is not the tie-in to a huge Marvel universe event, but the hyper-local focus on Kamala, her friends, family, and hometown. Most especially, the relationship and bond between Kamala and her mother. This volume was very much about relationships, and it was so, so  good. Rating: 5/5 stars

Volume 5: Super Famous – I’m kind of confused about the back story of what takes place in the Secret Wars in the greater Marvel universe, which occurs between Ms. Marvel’s Volume 4 and Volume 5, but it doesn’t seem to have a huge impact in Ms. Marvel’s Jersey City. Volume 5 picks up 8 months after Last Days, and Kamala is officially part of the Avengers, which creates a lot of difficulties in balancing school, superheroing, and family. Super Famous also marks the beginning of a new story arc featuring Hope Yards Development & Relocation (HYDRA). The new character additions, Mike and Tyesha, are both awesome. Although I am definitely shipping on Bruno and Kamala, Mike is very, very cool. Rating: 4/5 stars

5 thoughts on “A Few Graphic Novel Mini-Reviews for #DAReadaThon”