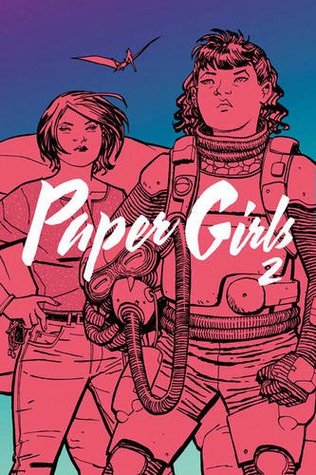 Brian K Vaughan is quickly becoming one of my favorite graphic novel writers. I sped through all seven volumes of Saga recently, but I didn’t even realize he was also the writer behind Paper Girls until I picked up both volumes at the library.

Paper Girls is about a group of 12-year-old paper delivery girls in the autumn of 1988. It’s the morning after Halloween, and some pretty weird stuff is going down in their hometown. The normal post-Halloween weirdos are still out, but there is something more paranormal happening as well. Across the two volumes, this turns into a bizarre tale of time travel that reminds me of Stranger Things. I’ve heard it described as LumberJanes on steroids…I need to go out and read Lumberjane’s to see if it is an apt comparison!

What I like most about Paper Girls, Volume 1 is the setting: 1988 suburbia, and the nostalgia is turned up high. Both the artwork and the writing is top-notch, if you don’t mind finishing up both volumes having pretty much no idea where the story is going. It’s definitely confusing, and I still don’t know what’s actually happening, but I have enjoyed the ride!

In Volume 2, the girls are catapulted into the future…2016. It just so happens to be election season (in 1988, we glimpse Reagan yard signs, in 2016 we get a Hillary). One of my favorite, and bittersweet, moments in Volume 2 is when two of the girls spot a Hillary yard sign. Tiffany remarks in excitement, “Mac, look. We get a girl president!”, to which Mac quips, “No, some lady is running. Doesn’t mean she’s gonna win.” OUCH. That STILL burns.

I like how each girl is distinct and has their own personality. Erin is very much a 12-year old girl, while the other three are more jaded and less innocent. Mac is definitely the most interesting, and most troubled, of the quartet. Two of the girls get to confront their adult selves (well, kinda….but to say anymore would be a major spoiler), and the result is both heartbreaking and hilarious.

Volume 3 releases in August, and I will definitely be picking it up with the hope there will be slightly more clarity about the plot and where the series is heading.

Black👏History👏 is 👏American 👏History. . Have you been following the google prompts from @rachel.cargle this month? My white followers please participate! Take the time, google and learn about each day’s subject, and come back and share with me something you learned. . #discoverourglory2020 #blackhistorymonth
Looking for escapist fiction? This would be one of my top picks for February! An adorable romance, witty banter, and progressive politics with a Madam POTUS? Totally my jam. 📚 . . #booknerd #bookstagram #lgbtq🌈 #currentlyreading
This is part of my #currentreads and #tbrpile this winter! What’s on your shelf this month? . . #currentread #bookstagram #bibliophile #booknerd #bookworm #graphicnovel
After dinner at @ncredclt 🎣 and dessert at @twoscoopscreamery 🍨 we swung by @lunchboxrecords. 🎶 This badass little record shop next to Maya’s middle school had her grandpa’s latest book on the shelves! He signed it for a lucky customer. . . . #therandbset #screamingjayhawkins #stevebergsman #grandpa #squadgoals #familytime #familylife #bookstagram #authorsofinstagram #piedmontib
I love how my cranberry cordial (cranberry infused vodka) turned out! Inspired by @witchineden I also added edible glitter dust to give it a shimmery sparkle! ✨🤍❤️ Made with locally sourced vodka from @murtomade 🥃 🍸 Can’t wait to make some Yule-tinis over the holidays! Recipe from Yule: Rituals, Recipes and Life for the Yule Season by Susan Pesznecker #yule #wintersolstice
The nonfiction books that defined my 2010s. Each one of these left a profound and lasting impact, and changed my thinking in some way. They are the books that I quote from, and recommend to others on a regular basis! 📚 📚 What are your nonfiction favorites that you read this decade? #top10ofthedecade #bookstagram #nonfiction