I’m finally getting a chance to write up some reviews for the books that I read during Dewey’s readathon! This one was one of my favorites. 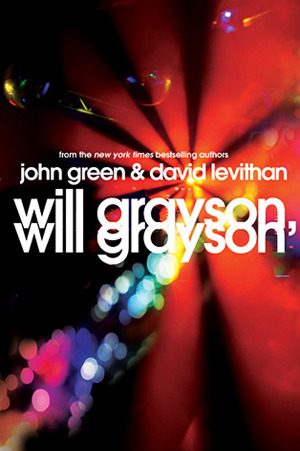 This is the story of two Will Grayson’s that meet about 1/3 of the way into the story. One Will Grayson, written by John Green, is the son of two doctors, loving parents that aren’t around very much. His family is fairly well off, and his best friend is Tiny Cooper. Tiny Cooper is a HUGE person, both in personality and size. He literally lights up the page. This Will lives by two life rules: 1) Don’t care too much, and 2) Shut up.

Caring doesn’t sometimes lead to misery. It always does.

The other will grayson, written by David Levithan, sees himself as a lowercase person (and his chapters are written entirely in lowercase). He lives with his single mother, struggles with severe depression and at the beginning of the story, has not yet come out to his friends and family as gay.

“maybe tonight you’re scared of falling, and maybe there’s somebody here or somewhere else you’re thinking about, worrying over, fretting over, trying to figure out if you want to fall, or how and when you’re gonna land, and i gotta tell you, friends, to stop thinking about the landing, because it’s all about falling.”

They randomly meet one night when their paths converge in downtown Chicago. Will Grayson is shy and struggles with whether or not he wants to be in a relationship. will grayson found love on the internet with Isaac, and is trying to meet him for the first time.

Because in reality, so much of this book isn’t about the two Will Grayson’s. It is about Tiny Cooper. For a while I worried that Tiny Cooper would stay flat and clichéd throughout the whole story, but we really got to see more depth to him by the end of the story.

Some people call this book a love story, and it is a love story. A love story about friendship that is both emotional and hilarious.

2 thoughts on “Book Review – Will Grayson, Will Grayson by David Levithan and John Green”