I am slowly making my way through The Blazing Star, which was on my Diversity Spotlight list last week. I feel like every time I pick it up, I get interrupted, and have to put it back down. I hate when that happens! I don’t know if it is the constant interruptions, or my mood that is still down in the dumps, but I am having a hard time getting into the book.

Wildfires are still raging in the North Carolina mountains, and for the past 3 days, my home in the Charlotte area has been hazy and smoky. So much so, that the local school district has cancelled outdoor recess and sporting practices until the air quality improves. The Code Red air quality, combined with all the drywall repair work currently underway in our bathroom renovation, has really triggered my asthma, so I am back on a nebulizer and frequent inhaler use at the moment. Ugh.

Hopefully, it will rain soon, but there is still no sign of rain in the forecast.  2016 certainly is continuing on its path of being the year of constant yuckiness.

On a positive note, I am extremely excited to participate in an upcoming Love Wins rally. You might be scratching your head on that one, in light of the recent election, but a group of mothers involved with a local nonprofit, OurBRIDGE, decided to unite together and send a message to our neighbors, city, country, and the world, that we stand together in the belief that the United States is stronger for its diversity and inclusion.

OurBridge Kids is a Charlotte-based nonprofit that provides a safe, nurturing and respectful environment for refugee and immigrant students and their families. The rally is getting a lot of attention locally, with an excellent line-up of speakers and attendees. It should be a very empowering and uplifting event, what so many of us need right now.

In honor of all the refugee families I have come to know over the years, all of my selections this week will focus on the experience of refugees.

Diversity Spotlight Thursday is a weekly feature hosted by Aimal @ Bookshelves and Paperbacks. Each week, you discuss three books featuring diverse characters or authors, that fall into each of following three categories:

What is the What by Dave Eggers

In a heartrending and astonishing novel, Eggers illuminates the history of the civil war in Sudan through the eyes of Valentino Achak Deng, a refugee now living in the United States. We follow his life as he’s driven from his home as a boy and walks, with thousands of orphans, to Ethiopia, where he finds safety — for a time. Valentino’s travels, truly Biblical in scope, bring him in contact with government soldiers, janjaweed-like militias, liberation rebels, hyenas and lions, disease and starvation — and a string of unexpected romances. Ultimately, Valentino finds safety in Kenya and, just after the millennium, is finally resettled in the United States, from where this novel is narrated. In this book, written with expansive humanity and surprising humor, we come to understand the nature of the conflicts in Sudan, the refugee experience in America, the dreams of the Dinka people, and the challenge one indomitable man faces in a world collapsing around him.

I have had the incredible privilege to get to know two Sudanese doctors who worked with the Dinka people during the Civil War, who eventually had to flee and became refugees themselves. The courage and optimism of so many Sudanese refugees, and most especially the Lost Boys, is beyond belief. This book is powerfully written, and is a must read for everyone.

Little known fact: Many, many refugees celebrate their birthday on January 1. Here in Charlotte, a local refugee agency holds a big birthday party every year in January for their clients. The reason for this is due to the fact that many refugees don’t know their actual date of birth. When that is the case, a new birthday is assigned to them during the resettlement process. The date always assigned for those who don’t know? January 1.

The Bone Sparrow by Zana Fraillon

Subhi is a refugee. Born in an Australian permanent detention center after his mother and sister fled the violence of a distant homeland, Subhi has only ever known life behind the fences. But his world is far bigger than that—every night, the magical Night Sea from his mother’s stories brings him gifts, the faraway whales sing to him, and the birds tell their stories. And as he grows, his imagination threatens to burst beyond the limits of his containment.

The most vivid story of all, however, is the one that arrives one night in the form of Jimmie—a scruffy, impatient girl who appears on the other side of the wire fence and brings with her a notebook written by the mother she lost. Unable to read it herself, she relies on Subhi to unravel her family’s love songs and tragedies.

Subhi and Jimmie might both find comfort—and maybe even freedom—as their tales unfold. But not until each has been braver than ever before.

Fact: There are many myths surrounding refugees. One such myth is that “Boat People” – those who arrive via boat to Australia – are not “genuine refugees”. This is UNTRUE!! There is no such thing as a ‘genuine’ or ‘non-genuine’ refugee. Refugee status should not be influenced by method of arrival, and 93.4% of asylum seekers who arrived by boat to Australia in 2011-12 were found to be refugees and granted protection.

However, Australia discriminates against asylum seekers based on their method of arrival. If they arrive with a valid visa – often a student or tourist visa – and then apply for protection, they are allowed to live in the community until their application is processed (this can take years). If an asylum seekers arrives on a boat, or another method, without a visa, they are sent to detention centres.

Some people end up stuck in a no-man’s land, denied protection by Australia, but unable to be sent back to their home country, and end up living in the detention centres for years upon years.

This includes children. And the conditions can be abhorrent, and so incredibly inhumane. 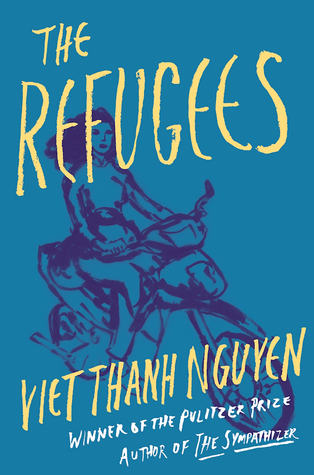 The Refugees by Viet Thanh Nguyen

Viet Thanh Nguyen’s The Sympathizer was one of the most widely and highly praised novels of 2015, the winner not only of the 2016 Pulitzer Prize for Fiction, but also the Center for Fiction Debut Novel Prize, the Edgar Award for Best First Novel, the ALA Carnegie Medal for Fiction, the Asian/Pacific American Award for Literature, and the California Book Award for First Fiction. Nguyen’s next fiction book, The Refugees, is a collection of perfectly formed stories written over a period of twenty years, exploring questions of immigration, identity, love, and family.

With the coruscating gaze that informed The Sympathizer, in The Refugees Viet Thanh Nguyen gives voice to lives led between two worlds, the adopted homeland and the country of birth. From a young Vietnamese refugee who suffers profound culture shock when he comes to live with two gay men in San Francisco, to a woman whose husband is suffering from dementia and starts to confuse her for a former lover, to a girl living in Ho Chi Minh City whose older half-sister comes back from America having seemingly accomplished everything she never will, the stories are a captivating testament to the dreams and hardships of immigration. The second piece of fiction by a major new voice in American letters, The Refugees is a beautifully written and sharply observed book about the aspirations of those who leave one country for another, and the relationships and desires for self-fulfillment that define our lives.

I don’t usually read collections of short stories, but I might make an exception for this one. I find it particularly interesting that the stories were written over a period of twenty years!

The Refugees will be published on 7 February, 2017.