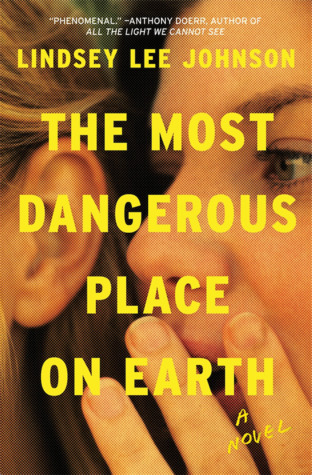 *This ARC was provided by the publisher via NetGalley in exchange for an honest review.*

A captivating debut novel for readers of Celeste Ng’s Everything I Never Told You and Curtis Sittenfeld’s Prep, The Most Dangerous Place on Earth unleashes an unforgettable cast of characters into a realm known for its cruelty and peril: the American high school.

In an idyllic community of wealthy California families, new teacher Molly Nicoll becomes intrigued by the hidden lives of her privileged students. Unknown to Molly, a middle school tragedy in which they were all complicit continues to reverberate for her kids: Nick, the brilliant scam artist; Emma, the gifted dancer and party girl; Dave, the B student who strives to meet his parents expectations; Calista, the hippie outcast who hides her intelligence for reasons of her own. Theirs is a world in which every action may become public postable, shareable, indelible. With the rare talent that transforms teenage dramas into compelling and urgent fiction, Lindsey Lee Johnson makes vivid a modern adolescence lived in the gleam of the virtual, but rich with the sorrow, passion, and beauty of life in any time, and at any age.

Is a wealthy, privileged high school the most dangerous place on earth? While that may be disputed, there is no denying that to many teenagers, the high school years are incredibly tough, and can certainly feel like the end of the world. This novel – written in short vignettes that offers a glimpse into multiple character’s POV – follows a group of teens from a traumatic event in 8th grade through high school graduation. The teen perspective is balanced out by the chapters from the POV of Ms. Molly Nicolls, a young, new teacher at the wealthy Marin County high school featured in the novel.

The setting is the definition of privilege on steroids. Wealthy suburban enclave, where teens have their own credit cards, BMWs, and little to no parent supervision. Lindsey Lee Johnson did an admirable job of using the setting as a starting place to explore the culture of wealthy, white privileged teens.

The format is where things go wrong. I really like the idea of the vignette chapters, but this book would definitely have fared better with a larger page count. Each chapter spends a brief amount of time focusing in on one of the characters. You hear that person’s inner thoughts and perspective for one chapter, and then they seem to disappear back into semi-anonymity. This could have worked extremely well if the reader had the chance to come back to that person’s POV a second or third time. What we’re left with, instead, is the feeling of incompletion and not knowing what lies beneath the surface. Take Abigail, for example, we see her chapter towards the beginning of the novel, yet the ramifications of what take place in “her story” carry throughout the rest of the book. But her voice is lost during the remaining 75% of the book. David Chu was another character that I really wish I could have heard more about. The same goes for Calista, who we hear from at the beginning and the end, and out of all the teens, was most deeply and sincerely affected by her role in the tragedy that takes place at the start of the story.

The characters in The Most Dangerous Place on Earth are all flawed, and Johnson does an excellent job at getting to the heart of the culture of affluency, and the impact it has on kids raised in such a setting, who are rarely denied anything by their parents.

I do, however, have one major problem with the story. Part of me feels that the initial set up: cyberbullying and the resulting teen suicide, was done for its shock factor. The first chapter was heartbreaking, but at no point in the rest of the story was the awfulness of the bullying behavior addressed in a meaningful way. In fact, the “trauma” for the kids who engaged in the cyberbullying was used as justification for their selfish and cruel behavior in high school. Not cool.

In regards to the audience, I have seen this book listed as both YA contemporary and adult contemporary. I think it falls more into the adult genre, despite the protagonist’s ages.

Would I recommend it? Yes. The Most Dangerous Place on Earth has flaws, just like the student’s within the pages, but it is a thought-provoking, quick read. I would also add a trigger warning for the way that it handles bullying.