Top Ten Tuesday is a weekly meme hosted by The Broke and the Bookish. This week we’re talking villains! My TTT will focus on villains in books, although most of my picks are from books that have been adapted into movies!  Therefore, my Halloween costume for this year, Maleficent, will not be included on this list, since the evil fairy in the original fairy tale is never named, and is nothing like the Disney version. But I had to mention her anyway, as she is one of my favorite villains!

A hero is a hero, but everyone loves a good villain.

Agatha Trunchbull from Matilda by Roald Dahl. With one look, she can strike fear into the heart of the students at Crunchem Hall Primary School. Well, except for Matilda!

Cruella de Vil from The Hundred and One Dalmatians by Dodie Smith. Yes, this was a book before it became a popular Disney film! She kidnaps puppies and skins them for their fur. Enough said. I also happen to love the Once Upon a Time version (pictured above) of Cruella. 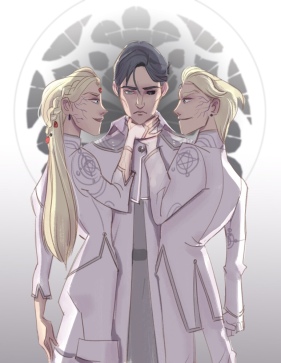 President Snow from The Hunger Games by Suzanne Collins. Coriolanus Snow is so, so evil. He is ruthless in his quest to hold on to power.

Astrid and Athos Dane from The Darker Shade of Magic by V.E. Schwab. The two rulers of White London are quite sadistic, each in their own way. Astrid likes to play with her prey, while Athos is more brutal. They are both horrifying, but I loved every moment that one or the both of them made an appearance on the page.

Black Jack Randall from the Outlander series by Diana Gabaldon. The guy you love to hate. I feel like I hate him as much as Claire and Jamie do! Zero sympathy whatsoever for this guy, but boy, do I love him as a character. And I love how Tobias Menzies portrays him on the Starz series.

Hannibel Lecter from Red Dragon and The Silence of the Lambs by Thomas Harris. “I ate his liver with some fava beans and a nice chianti.” is one of my favorite lines of all time. Trivia time: In the book, he actually says “Amarone”, not “Chianti”. A genius who is also a serial killer, and 100% evil.

Count Dracula from Dracula by Bram Stoker. Dracula, as originally conceived by Bram Stoker, is the ultimate vampire villain. As much as I like modern-day vampires, they just don’t compare to the original bad dude with fangs. Dracula’s charm and easy seduction of his victims is part of what makes him such an appealing villain to me.

Sauron from Lord of the Rings Trilogy by J.R.R. Tolkien. The Necromancer of Dol Guldur gave me nightmares the first time I read the LOTR trilogy. Throughout LOTR, Sauron is never described, but his influence is pervasive and terrifying. Sauron’s evil is an edgeless darkness that seeps into your soul and scares the bejesus out of you.

Black👏History👏 is 👏American 👏History. . Have you been following the google prompts from @rachel.cargle this month? My white followers please participate! Take the time, google and learn about each day’s subject, and come back and share with me something you learned. . #discoverourglory2020 #blackhistorymonth
Looking for escapist fiction? This would be one of my top picks for February! An adorable romance, witty banter, and progressive politics with a Madam POTUS? Totally my jam. 📚 . . #booknerd #bookstagram #lgbtq🌈 #currentlyreading
This is part of my #currentreads and #tbrpile this winter! What’s on your shelf this month? . . #currentread #bookstagram #bibliophile #booknerd #bookworm #graphicnovel
After dinner at @ncredclt 🎣 and dessert at @twoscoopscreamery 🍨 we swung by @lunchboxrecords. 🎶 This badass little record shop next to Maya’s middle school had her grandpa’s latest book on the shelves! He signed it for a lucky customer. . . . #therandbset #screamingjayhawkins #stevebergsman #grandpa #squadgoals #familytime #familylife #bookstagram #authorsofinstagram #piedmontib
I love how my cranberry cordial (cranberry infused vodka) turned out! Inspired by @witchineden I also added edible glitter dust to give it a shimmery sparkle! ✨🤍❤️ Made with locally sourced vodka from @murtomade 🥃 🍸 Can’t wait to make some Yule-tinis over the holidays! Recipe from Yule: Rituals, Recipes and Life for the Yule Season by Susan Pesznecker #yule #wintersolstice
The nonfiction books that defined my 2010s. Each one of these left a profound and lasting impact, and changed my thinking in some way. They are the books that I quote from, and recommend to others on a regular basis! 📚 📚 What are your nonfiction favorites that you read this decade? #top10ofthedecade #bookstagram #nonfiction